5% of each Manta sale is donated to Oceana ~ “Protecting the World’s Oceans”.  Please visit www.oceana.org.

​"Man is only ethical when life, as such, is sacred to him, that of plants and animals as that of his fellow men, and when he devotes himself helpfully to all of life in need of help." ~ Albert Schweitzer.
Manta Ray Wood Box 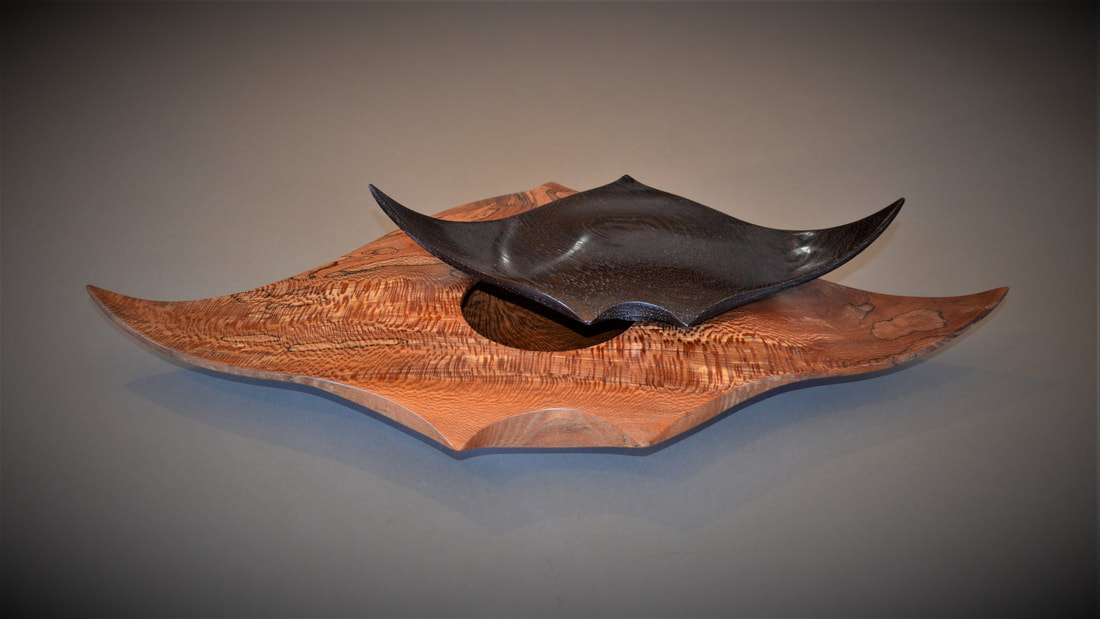 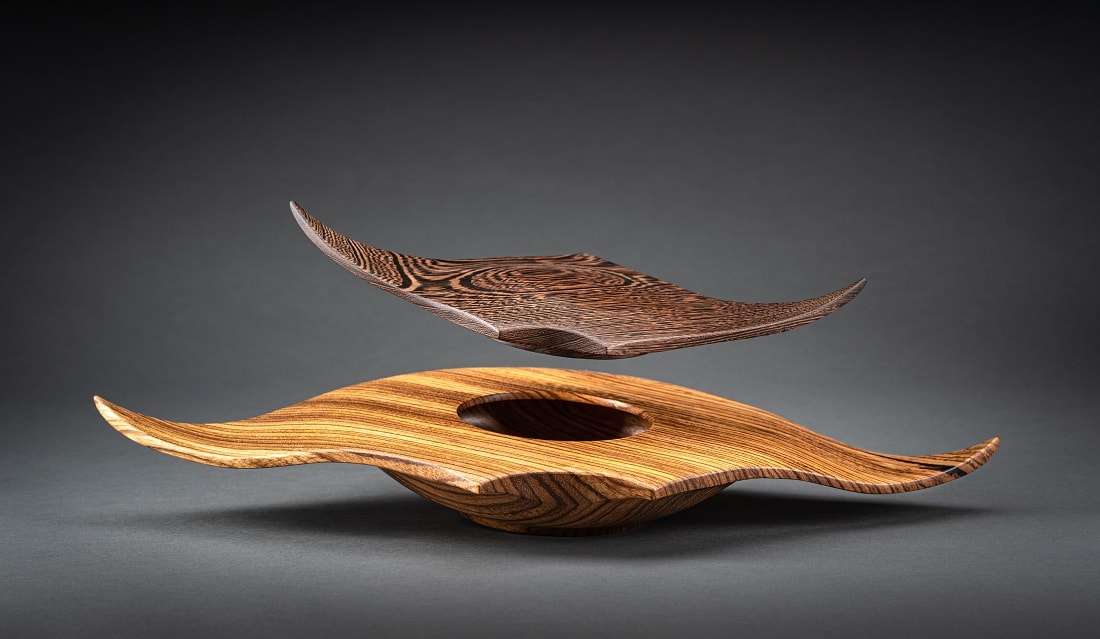 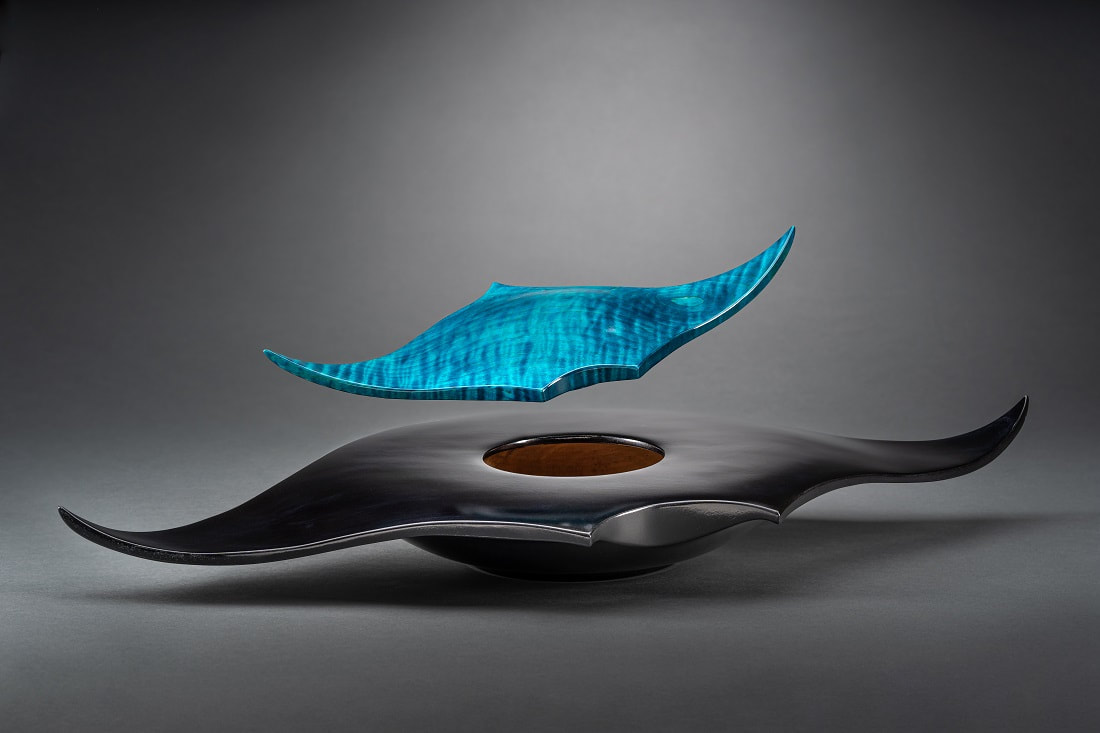 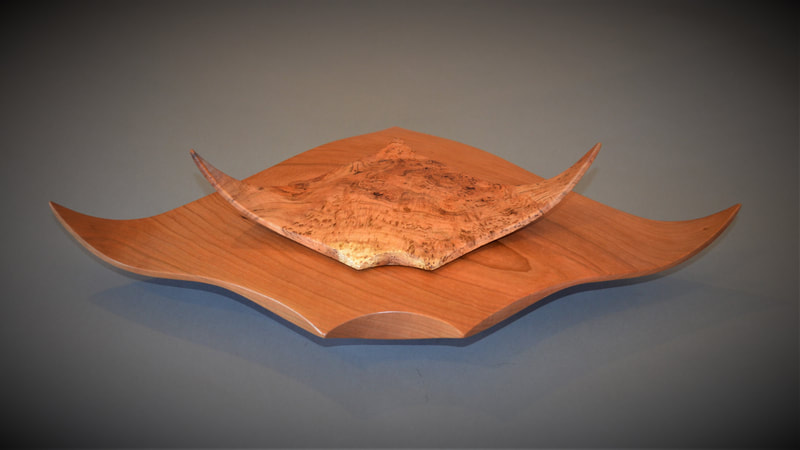 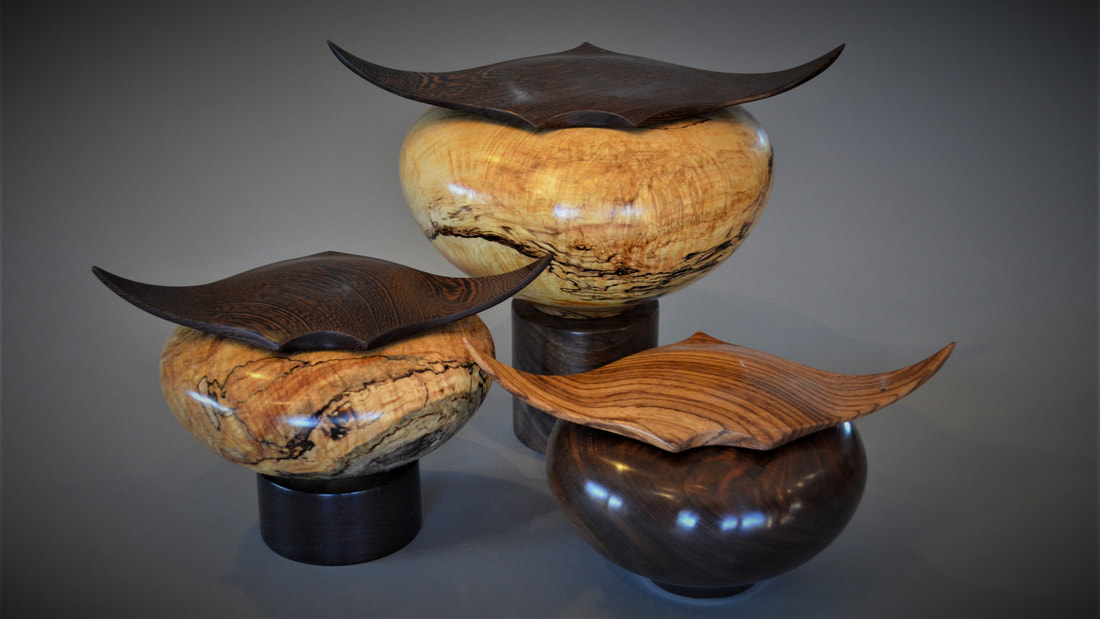 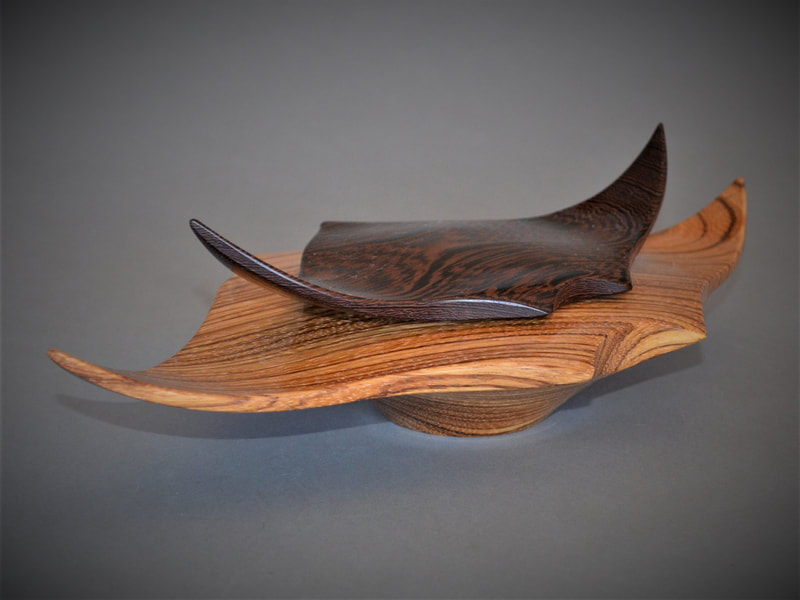 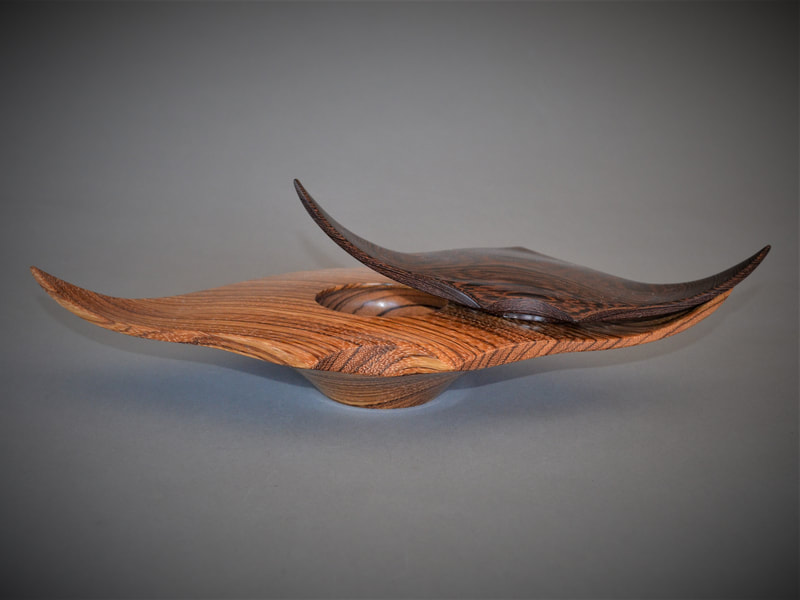 Zebrawood Manta Ray Box w/ Wenge Manta Lid. 14.5" wingspan.
12 Facts About Manta Rays
Manta Rays Have The Largest Brain Of All Fish
Manta rays have a reputation for being curious. They have an interest in observing divers and tend to have their own unique personalities. Mantas are one of the most intelligent fish in the sea, and that's likely because of their massive brains. They have the largest brains of all fish, packed full of glial cells that are believed to be tied to intelligence. They have more glial cells than house cats, meaning they may be smarter than some of our pets. Mantas who get tangled in fishing nets have been observed coming up to divers for help, a further sign of their incredible intellect.

They Are The First Fish To Pass The Mirror Test
Manta rays are one of the most intelligent animals in the ocean, and a study has shown that they may be as self-aware as dolphins, primates, and crows. Two manta rays were exposed to a mirror and their reactions were documented. Neither treated the mirror like another manta, and both performed behaviors that were completely novel.  One manta watched itself as it blew bubbles in the mirror, and both took a sharp interest in their reflections and contorted their bodies into unusual positions. Some believe this is evidence that they knew what they were seeing, but not everyone is convinced. At least one researcher wants to see the results of neural imaging on a manta ray as it interacts with its reflection.

Mantas Are Massive
Mantas are the largest species of ray in the world, dwarfing most sting rays. The largest mantas have an incredible wingspan of 25 feet and can weigh well over 5,000 pounds. They grow very slowly overtime, not reaching sexual maturity until they reach about 10 years of age. Their slow growth rate may explain how they can reach such monstrous proportions.

Males Form "Mating Trains" As They Compete For Female Attention
Possibly one of the most bizarre mating behaviors in the animal kingdom, manta "mating trains" are as interesting as they are humorous. When a female manta is ready to mate, she will often be mobbed by groups of males numbering 30 or more individuals. These males follow her every move, part of an elaborate mating ritual where the female tests the persistence and skill of her suitors. She swims exceptionally fast, and the males that can't keep up are left in the dust.
The remaining males will often duke it out to be in the front of the train. The female will usually mate with the most persistent male who has managed to fight his way up to first place spot. It's ultimately up to the female to pick which mate she believes will be the most fit.

Manta Rays Have To Keep Swimming In Order To Breath
Like many species of shark, manta rays need to be in constant motion in able to breath properly. This is unfortunate for them as they are unable to stop to sleep or rest. They cannot respire, so the only way for them to get oxygen is to have a steady stream of oxygenated water passing through their gills. Manta rays accidentally caught in human fishing nets are at extreme risk of death because they can get stuck and become immobilized.

There Are Actually Two Separate Species Of Manta Rays
The term "manta" actually describes a genus of ray species. There are only two extant species of the manta genus, the larger Manta birostris and the somewhat smaller Manta alfredi. While the two species are very similar, there are some key differences that define the two. Their closest relatives are mobula rays, a species of stingray that also feeds on plankton.

They Can Sieve Plankton From The Water With Their Unique Mouths
While manta rays may be huge, a considerable portion of their diet is made from some of the smallest organisms on Earth. They use their gaping mouths as filters to sieve out plankton from the seawater in huge gulps. There is a trend of large sea creatures that live on a diet of small creatures; whale sharks, the largest fish in the world, also eat a large amount of plankton, and many blue whales survive on a diet of krill. They all have various methods for filtering their food out of the water.

Recent Studies Show That Mantas May Be Proficient Hunters
While the common belief for years was that manta rays purely fed on plankton filtered from seawater, a study published in 2016 offers some evidence that might change the way we look at mantas forever.  Looking directly inside a mantas stomach can prove fatal for the animal, so researchers devised a way to determine their diet by analyzing tissue samples taken from the manta. They looked for chemical markers to see how big a role plankton played in their cell development, and the results were shocking. The samples analyzed all showed that mantas do not get a majority of their food from zooplankton that lives near the surface, and that small to medium sized fish actually play a critical role in their diet. Only 27% of their diet comes from zooplankton found near the surface, while 73% comes from a variety of other sources.

Female Mantas Give Live Birth
Unlike many species of fish, manta rays do not lay eggs. Instead, they give birth to live young. Like most mammals, mantas have a uterus where there eggs grow and develop into pups. Manta pregnancy last between 10 and 14 months and usually end with a single pup being born. At birth, pups can already have wingspan of 1.5 meters, or nearly five feet. Mantas don't tend to reproduce often in comparison to other animals, they only have about one pup every few years.

Mantas Are Considered An Endangered Species
Unfortunately, these wonderful animals are the victims of all sorts of threats. They face natural predation from large predators like sharks and orcas, and many wild mantas sport scars from shark bites. The most common target is their long fins, and mantas actually have the ability to regrow most bite-inflicted damage.  The biggest threats to manta populations is not natural predation, but human interference. They often get caught up in fishing nets and, with no ability to swim backwards, will struggle against the nets and tangle themselves even further. These encounters with nets are often fatal for the mantas, as they need to stay in constant motion to breath. They are also being actively hunted for their specialized gill plates, which are used extensively in Chinese traditional medicines.

They Are More Closely Related To Sharks Than Bony Fish
Like sharks, all rays are cartilaginous fish. This means that their skeletons are made of cartilage instead of bone, a big difference from many other fish species. Sharks and rays both belong to a class of organisms called Chondrichthyes. This class also includes skates, sawfish, and chimeras, and each of these creatures share some basic characteristics. They all have cartilaginous skeletons, scaly skin, teeth that are constantly being replaced, and pelvic claspers used in mating.

They Have Fairly Long Lifespans
Many larger animals tend to have longer lives, and there's no exception with manta rays. Estimates put their lifespan at about 40 years, but some experts believe that they may be able to live much longer. Research is underway to try and pinpoint the manta's natural lifespan, but it will likely take a few decades to yield results.