MIKE SORGE - Sculptural. Inspirational. Functional.
Collaborations
It takes two flints to make a fire. ~ Louisa May Alcott
It takes both sides to build a bridge. ~ Frederik Nael
It is in collaboration that the nature of art is revealed. ~ Steve Lacey​
No one can whistle a symphony; it takes a whole orchestra to play it. ~ Halford. E. Luccock 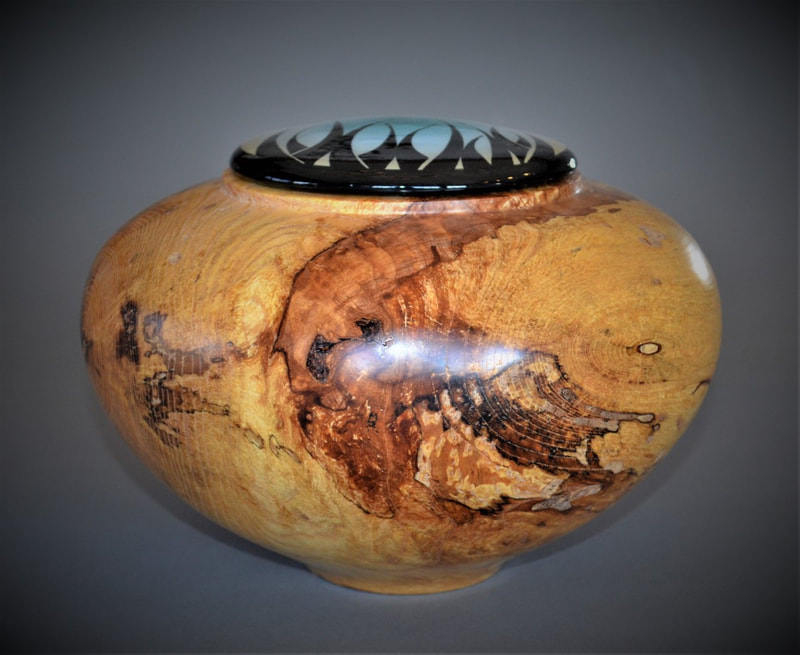 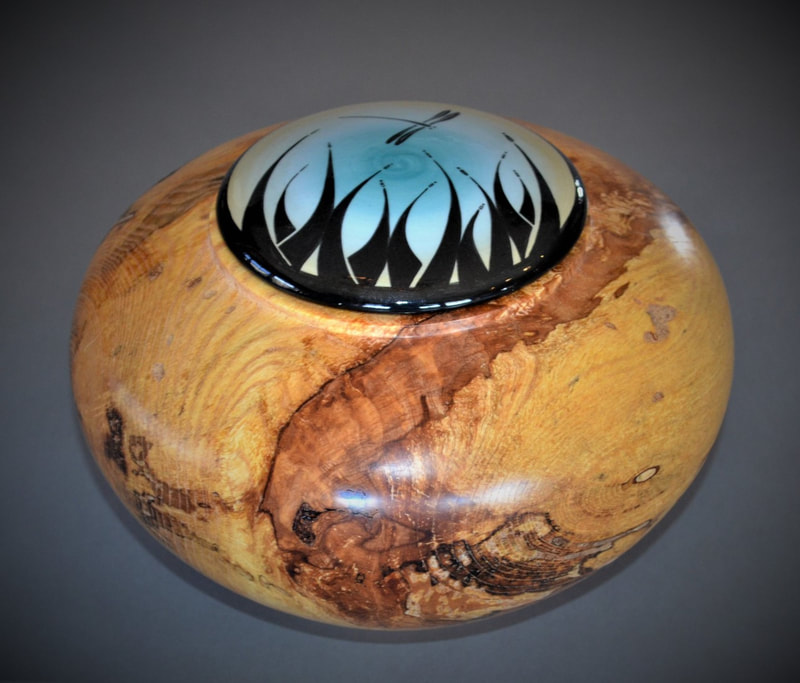 The Dragonfly is a symbol of maturing wisdom, renewal, new light and joy, and is associated with prosperity, swiftness, strength, peace, purity and harmony.  In combination with the wonderful character of this aged, spalted hickory, crotch-wood, classically shaped, hollowed out storage vessel, “Renewal” inspires hope from the example of life well lived.
Manta Ray Box 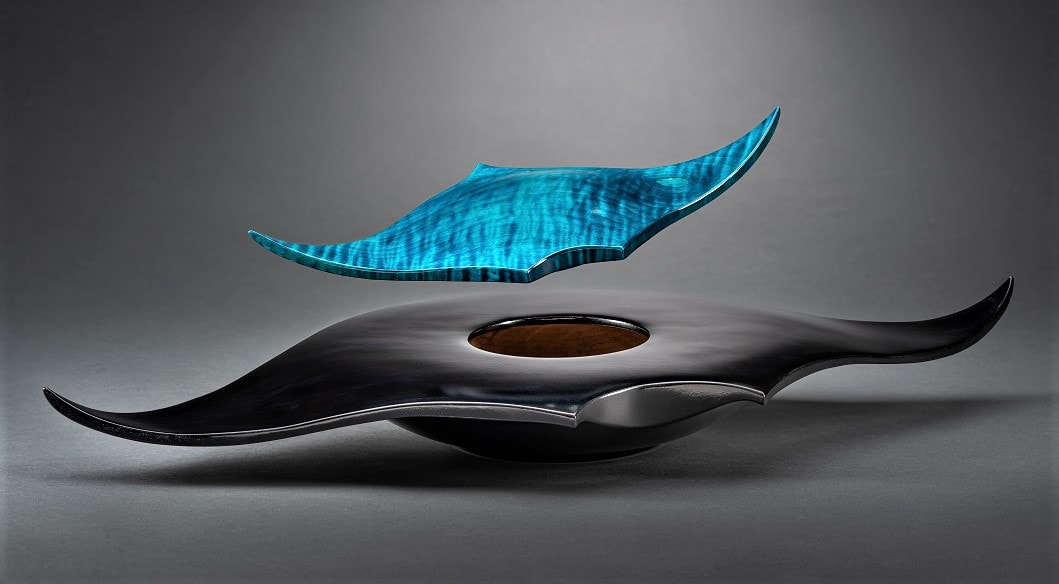 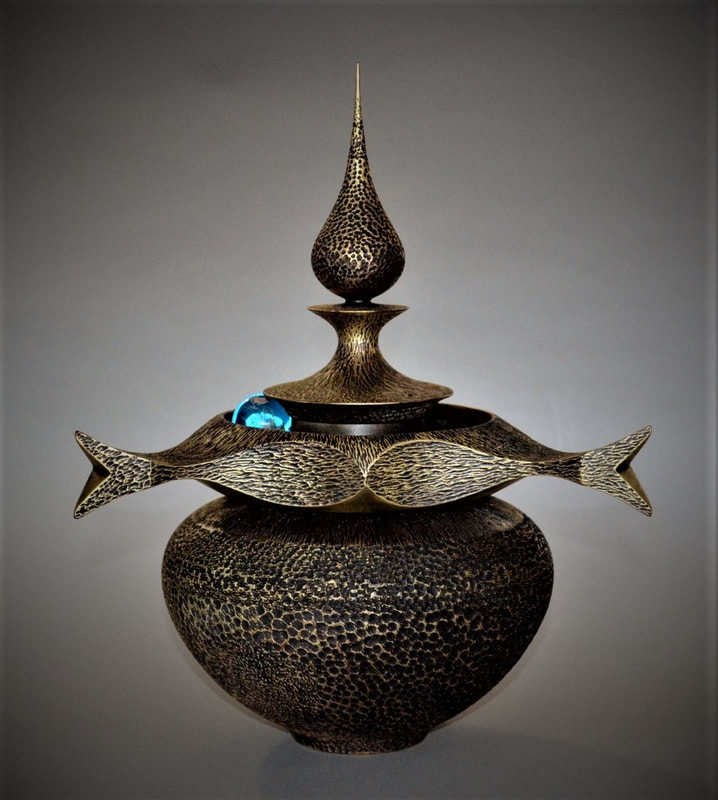 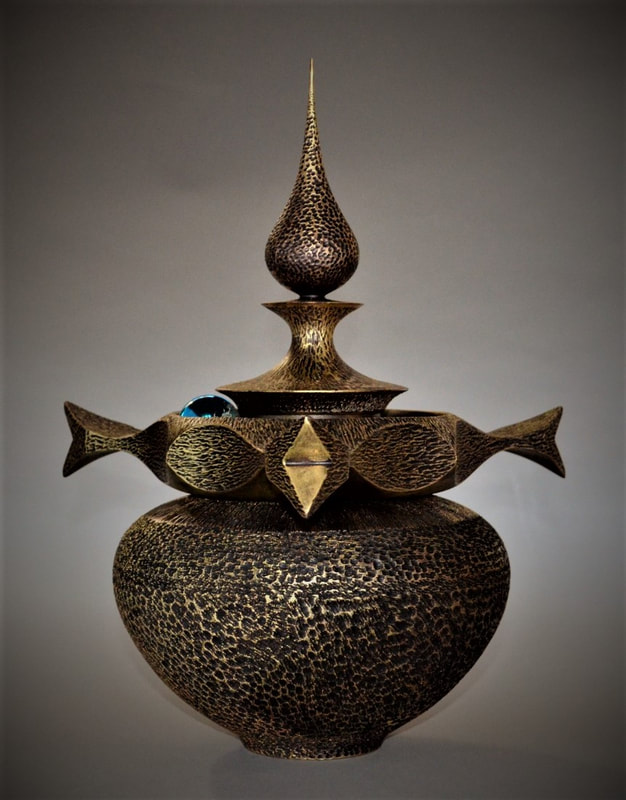 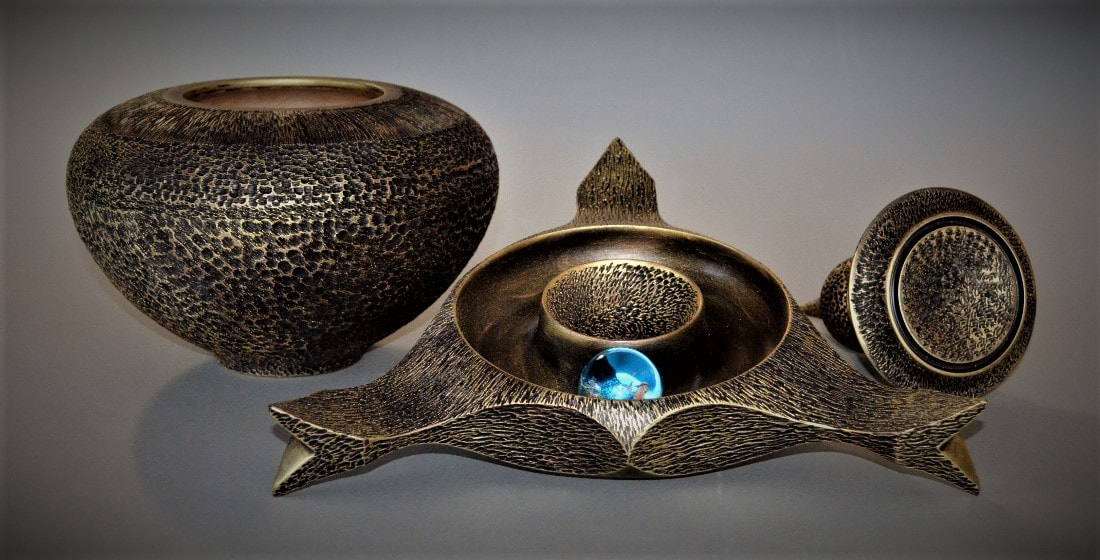 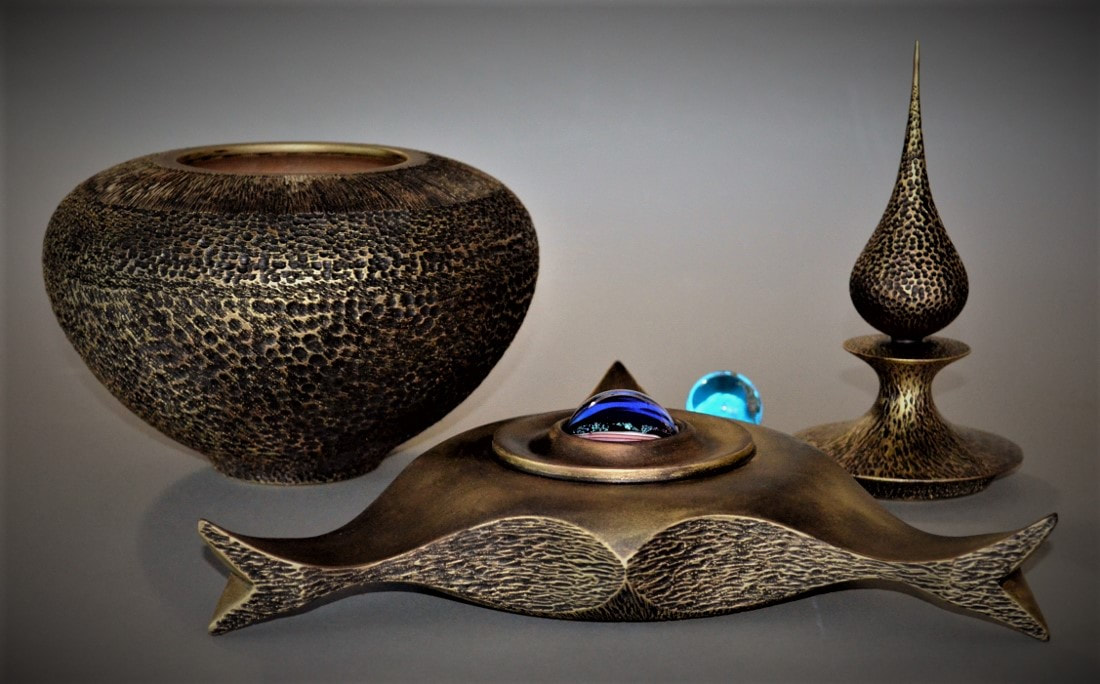 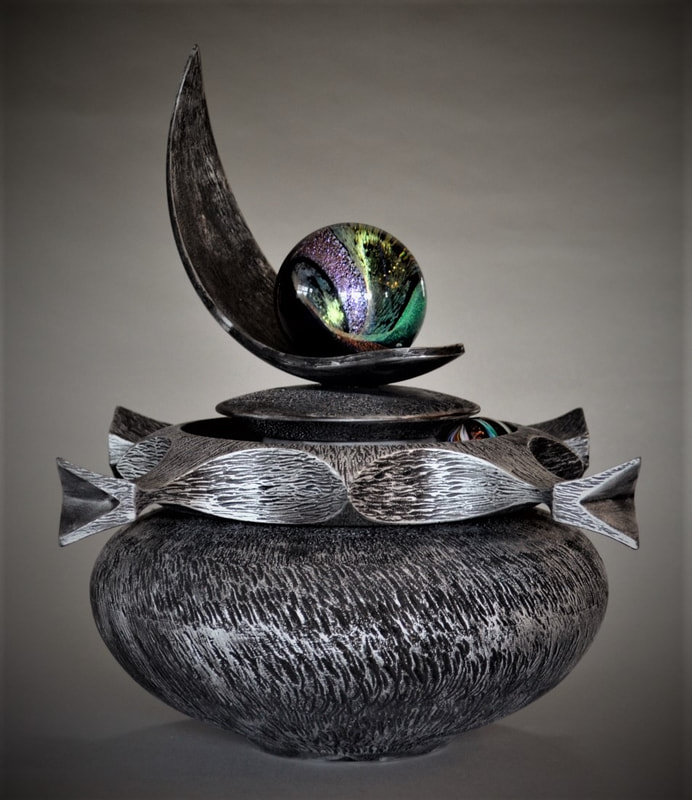 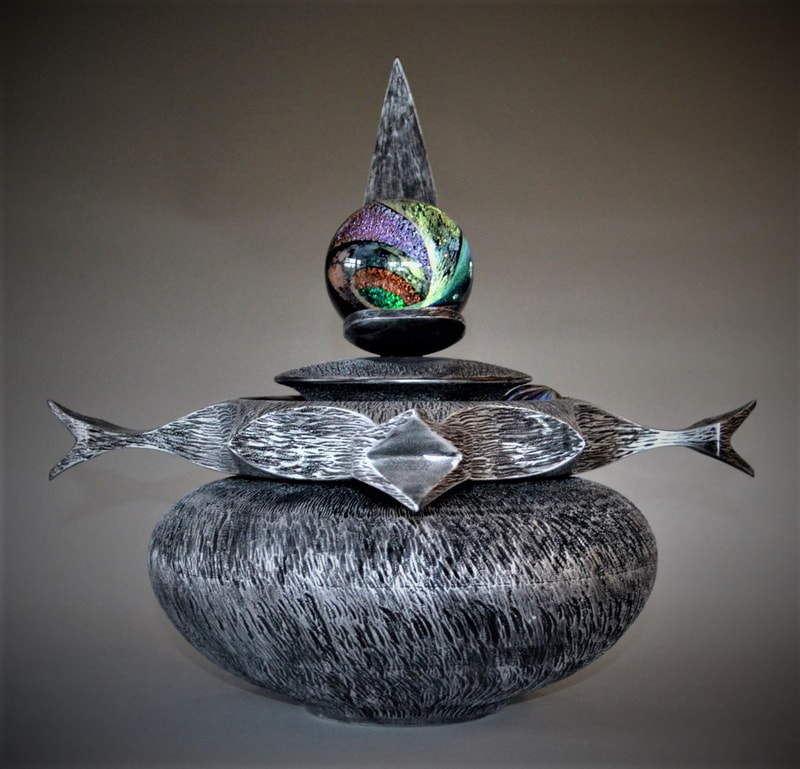 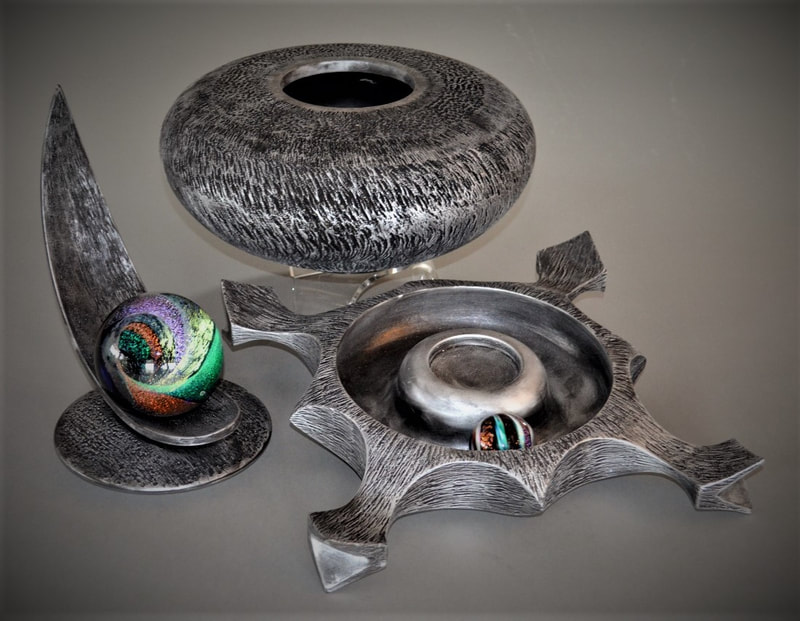 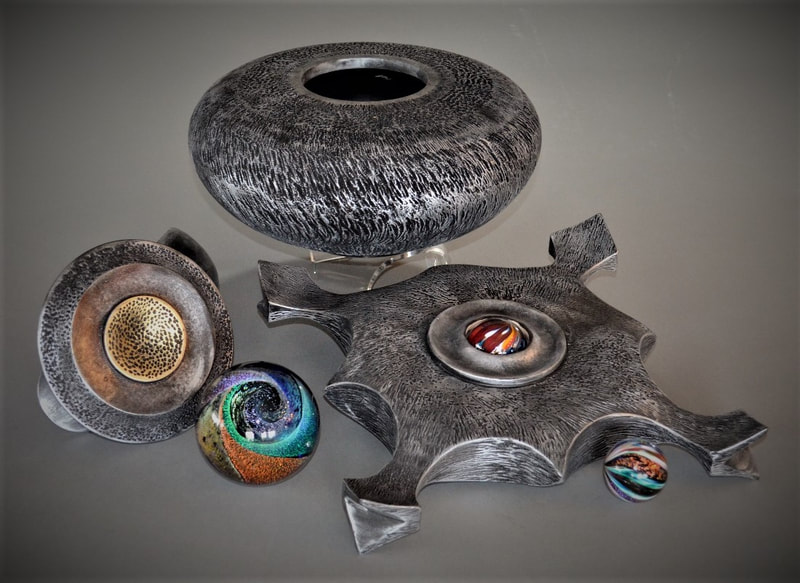 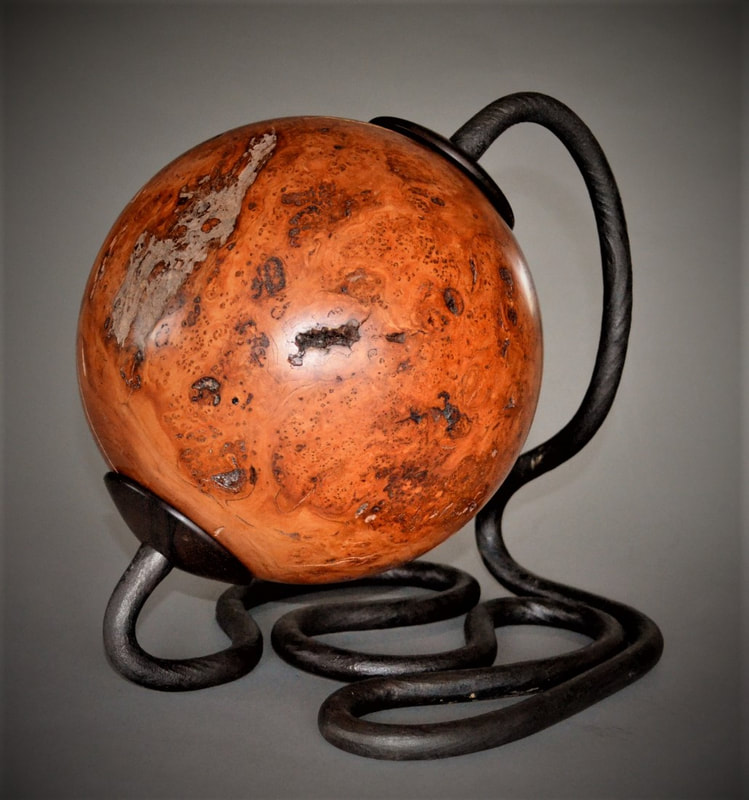 Turned ​9" diameter solid Cherry Burl Sphere with turned cavity to hold heavy duty sealed bearings which are covered/hidden under turned/fitted Macassar Ebony Polar End Caps that sit in/on inner raceways of bearings and also receive wonderfully designed and forged rope-like iron stand.  The forged stand was made by the inimitable Peter O'Shaughnessey.
Collaborating Artists:
​Marti Mocahbee
As a full-time studio potter since 1995, I have enjoyed working with clay since I was exposed to wheel throwing as a teenager. My pottery pieces are hand-painted with layers of underglazes on Georgia red clay to give the excellent color and definition which has been recognized at fine art festivals around the country. My love of clay and passion for history is uniquely combined in creating all my works. The designs have cultural and historical influences. Finding ways to compliment form with design is my biggest challenge and one that I take on with energy and enthusiasm. I received a Bachelor of Arts with high honors from the University of Cincinnati, Ohio in 1994.

​Dave Swiger
My early years were influenced by my father who was a die maker cutting out patterns and setting knives to stamp out various boxes; including candy, ice cream, cereal, wax paper (yep Cut-rite’s boxes), etc.  Dad had to cut out these patterns to within 1/32 of an inch freehand with a scroll saw.  I was marveled by his skill to do so.  It is this influence that guides my woodworking and woodturning endeavors to this day and always will (contentmentturnings.com).

George Jones III
George began the craft of woodturning 16 years ago. Since then he has studied with a number of internationally renowned wood artists, and for eight consecutive years studied at the Arrowmount School of the Arts in Gatlinburg, TN. Exposure to artists working in other media at the school has allowed George to develop a unique perspective by incorporating some of these techniques in his work. Each of the artist’s pieces is unique, from bowls to wall art and tell a story.  It is his hope that the love and fulfillment from creating each piece is apparent and brings enjoyment to those who see them. George became a member of the American Association of Woodturners and Capital Area Woodturners in 2002, and is a current board member of the Vietnam Veterans of America, Chapter 227.
Words
"If we have seen further, it's because of having stood on the shoulders of giants." ~ Isaac Newton
*****
“Many times a day I realize how my own outer and inner being is built upon the labors of my fellow men, both living and dead, and how earnestly I must exert myself in order to give in return as much as I have received.”  ~ Albert Einstein
*****
Unfathomable is the extent of collaborations within the essence of individual experiences. Each thought, word and deed is an unfathomable collaboration, creatively lived and made uniquely excellent according to individually attained awareness and integrity, a willfully acquired depth and spectrum of virtue, continually edited and kindly expressed. ~ mjs